“I’ve made many mistakes in my life, but choice of career wasn’t one of them.” – Dr. Jonassen

This quote epitomizes Dave’s passion for what he did. By all measures, Dave Jonassen was a leader in the fields of learning technologies, and educational psychology having particular impacts on the use of technology in education and the study of problem solving. Dr. Thomas Reeves, Emeritus Professor from the University of Georgia described the impact Dave’s work had on him.

“David was not only a great inspiration to me in my career but he was also a pioneer in his field. He is known for his work in taking the field of instructional technology into the new century. In his career, he authored 37 books, 182 journal articles, 67 book chapters, and over 400 presentations US and globally. We can attribute Dr. Jonassen’s work to literally changing the culture of learning.”

I was blessed to be Dave’s collaborator both in our marriage and in our professions. This page provides a brief summary of  his incredible career. 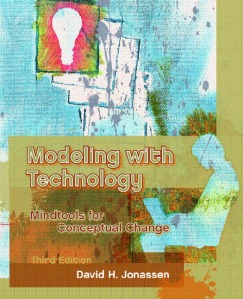 Dave coined the term “Mindtools” to describe a different way of using computers and software in learning. Rather than having students learn from the technology, Dave proposed that we give the technology and software to students and let them learn with it. Rather than giving students a completed concept map that shows the relationships between concepts in an introductory biology class, Mindtools gives the concept mapping tool to the student and let them create an ongoing and developing map of their own understanding of the domain knowledge.  In essence, we are letting the learners show what they know, including their misconceptions, by representing that knowledge with technology tools.  Learn more: Internet at Schools: Homage to Dr. Jonassen

“Folks in the real world don’t get paid to write in blue books; they get paid to solve problems!” — Dave Jonassen 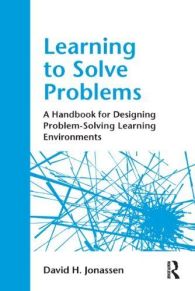 It was important to Dave that his work be useful in every day settings. He strongly believed that an educational system needs to prepare students to do the work in real life and not just within the confines of a textbook and classroom. After studying engineering professionals in the workplace, David saw a need for colleges and universities to better prepare engineers for the ambiguous, ill structured problems they would encounter on-the-job.   Dave saw problem solving as the most authentic type of task and skill we could teach our learners to engage in. And to that end, Dave spent the last ten years of his life devoted to the study of problem solving. His work culminated in the publication of Learning to Solve Problems: A Handbook for Designing Problem-Solving Learning Environments, 2011 (Routledge).

At the University of Missouri, we have established the David H. Jonassen Scholarship. We are in the process of endowing the scholarship. Donations will help us award this scholarship to a deserving graduate student in Information Technologies. Dave loved working with Graduate students. And there are many of his graduates working in academic and other positions throughout the world today. Help Perpetuate David’s Legacy; give today.

Reflections on the Scholarly Contributions of Dr. David H. Jonassen